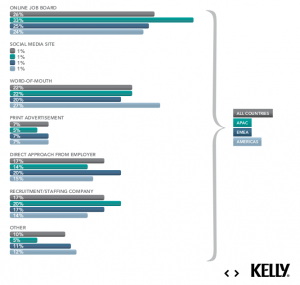 Most people around the world continue to find work through either online job boards or personal connections, concluded the Kelly Global Workforce Index in its 2011 Social Media/Networking Survey. While an average 26% of respondents got their most recent job through an online listing and 22% by word of mouth, only 1% said they had obtained it through social media such as Facebook, LinkedIn, blogs or Twitter.

The Kelly survey was conducted across 30 countries and a population of 97,000 respondents. It spanned the Americas, Europe & the Middle East (EMEA) and Asia Pacific (APAC).

Interestingly, Kelly found pronounced differences in certain regions: 33% of job searchers in the APAC region, for example, found their job using an online job board, well above the 26% average. Similarly, 27% of those surveyed in the Americas said they found their job through word of mouth, compared to 22% for the survey as a whole.

Though Kelly did not speculate as to the underlying reasons for the variance, it’s reasonable to assume both cultural factors and regional economic growth play a role. Employers in fast-growing Asian economies may be more comfortable hiring “blind” than those in stagnant developed economies because the demand for workers is much higher.

And while the Kelly study found most job seekers had little luck finding employment through social media, it also showed significant variance across cultures for those who did. Facebook and LinkedIn were far and away the most popular social networks for job hunting. 33% of those who searched for jobs through social media said they used Facebook, 32% LinkedIn (Twitter lagged well behind at 3%). Yet the survey found job seekers in the EMEA and APAC preferred to use Facebook, while those in the Americas overwhelmingly favored LinkedIn.

Perhaps the key takeaway for expat recruiters is to tailor their strategies to the cultures of the expats they want to attract. In Asian countries they may experience plenty of success with online listings,but in the Americas a personal presence at a job fair could be more effective. They also shouldn’t place too much emphasis on social media yet: it has a long way to go to replace more traditional job search strategies.