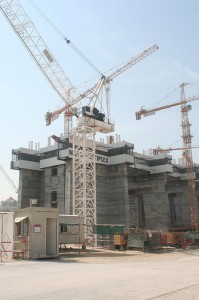 The outlook for real estate jobs in the Middle East is improving.

The average salary in the Middle East’s real estate sector has fallen only 1% in the last year, from Dhs 38,351 to Dhs 37,965. The results were obtained as part of the Middle East Salary Survey conducted by the Royal Institute of Chartered Surveyors (RICS) and Cityscape Connect. It was commissioned by property recruitment consultancy Macdonald and Company.

The survey consisted of 1,400 real estate professionals across the Middle East (though the survey population was skewed with higher numbers of respondents from the UAE, Qatar and Saudi Arabia).

Redundancy rates have also improved, falling from 24% to 21%. Additionally, 78% of those made redundant over the last year said they have already found new employment.

The current situation is challenging but we expect that the Gulf States will be resilient to global economic uncertainty and we will be looking for rebuild stories as the Arab Spring plays out […] We are confident that there will be a continuing demand for high caliber property professionals in the wider Middle East region particularly with strong asset management skills.

The survey found that the Middle East’s real estate sector remains attractive to foreigners from the US and Europe, with better prospects for earnings and advancement. Dubai remains the top destination for real estate workers.