Indians most likely to work abroad 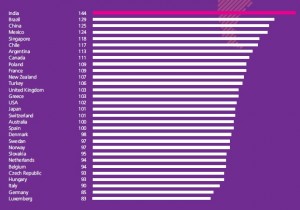 Indians are the most globally mobile of any nationality, followed by Brazilians and Chinese. So found HR consultant Ma Foi Randstad‘s latest global Work Monitor survey.

The results prove a change in the world’s expat workforce favoring the so-called BRIC countries.

The survey assigned India a mobility index of 144, earning it the top spot for the eighth consecutive quarter. By contrast, the index was only 85 in Germany, 90 in Italy, 102 in the UK and 103 in the US.

These findings [for developed countries] are further corroborated by low to moderate factual job change and lower confidence levels in finding a new job respectively.

Not only are Indians more likely to work abroad, they’re also less demanding than other nationalities when it comes to compensation. 60% of highly educated Indians said they would move abroad to work even if their salaries stayed the same–as did 70% of all Indians between the ages of 25-34.

We expect considerable change in the makeup of the world’s expat workforce over the coming years. This will not only reduce the number of assignments available to western expats, but also apply consistent downward pressure to their compensation packages. In countries like Singapore the days of paid housing and private drivers are already at an end.

The expat’s loss is the recruiter’s gain, however, as the decline of the traditional expat package (and indeed the traditional “expat”) means it may gradually become less expensive to attract qualified talent from overseas.